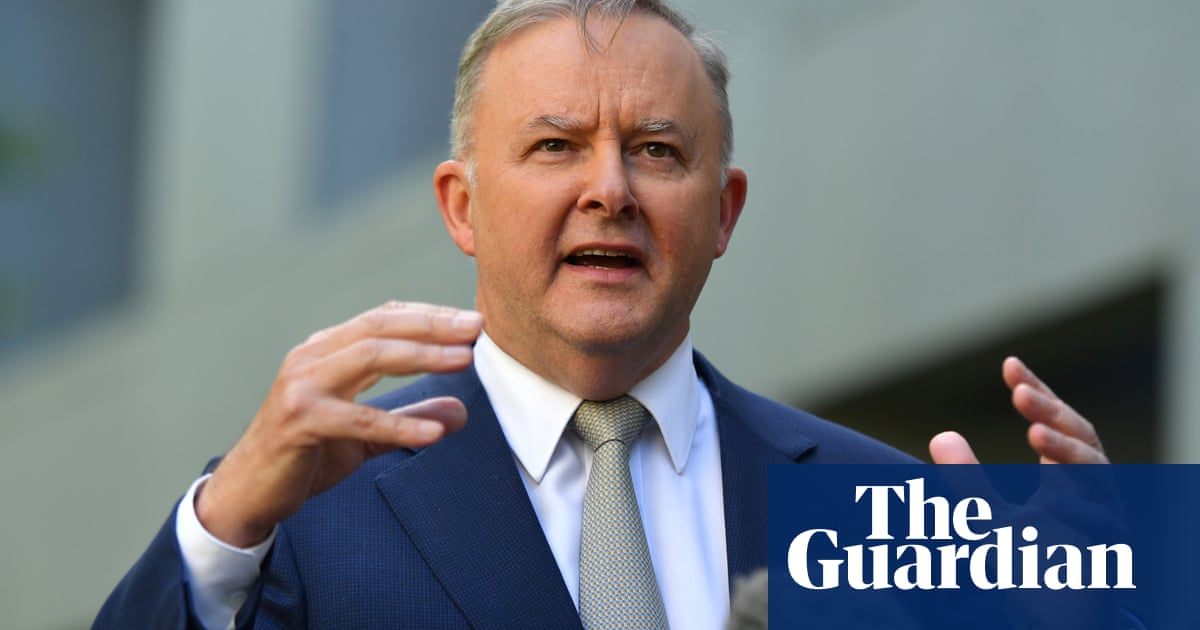 Anthony Albanese has used a business fundraiser to declare Labor is “pro-aspiration, pro-entrepreneurship, pro-wealth creation and pro-growth” because “when business does well, workers do well, and vice versa”.

The Labor leader told the business exchange program on Wednesday he wanted cooperation with business to confront the challenges facing the nation, telling corporate participants on the remote hook-up “we won’t always agree, but you will always have my respect – and my ear”.

“My colleagues and I don’t pretend to have all the answers, but we want to find them,” Albanese said. “We should be cooperating in the knowledge that ultimately, we are all on the same side, striving for the same objectives”.

“This isn’t a sudden Road to Damascus moment for me. It’s a message I have been delivering for two decades in public life.”

As part of the pitch to business, Albanese drew attention to Labor’s legislative record during the pandemic, saying the opposition had chosen to pass government measures “to keep this recession short and shallow, and to ensure the recovery is fast but enduring”.

“When government policy has been flawed, the criticism we have offered has been constructive, and ultimately, we have been supportive,” the Labor leader said.

“We have not stood in the way of legislation that is going to make life easier for Australians during a time as challenging as this”.

He said Labor was hoping to replicate the “constructive” relationship with the government with business engagement because “Australians want us to work together to find the best way forward”.

The overture comes as the Labor leader continues to battle significant internal instability.

Albanese’s deputy chief of staff, Sabina Husic, resigned on Tuesday night after a complaint was posted online that aired a series of uncorroborated claims against personnel in the federal opposition leader’s office.

The Labor leader characterised the dossier as a fake and Husic said the claims outlined in the document, purporting to be from Labor staff, were “malicious, false, fake and defamatory”.

Labor’s plan last week to use Joe Biden’s victory in the presidential election to intensify criticism of the Coalition’s climate change policies was also derailed when the then shadow resources minister, Joel Fitzgibbon, declared it was “delusional” to interpret the US result as an endorsement of ambitious climate action.

Fitzgibbon’s rebuke triggered a boilover in the regular meeting of the left caucus. The outrage in the left was then followed by a blow-up between Albanese and Fitzgibbon in the shadow cabinet meeting last Monday.

Fitzgibbon announced the next day he would go to the backbench before he embarked on a media blitz that culminated in him calling for the shadow climate change minister, Mark Butler, to be dumped from his portfolio at a planned end-of-year reshuffle.

The mood within Labor is downbeat, and some MPs are increasingly concerned they are at risk of losing their seats at the next federal election if Albanese fails to lift, and if the instability and backbiting continues.

Reserve Bank of Australia to focus on unemployment rather than inflation

Senior figures insist Albanese maintains the support of critical players both on the left and the right.

But the former Labor leader Bill Shorten has used a couple of interviews in recent days to pointedly praise the attributes and interventions of Tanya Plibersek, his former deputy, while acknowledging there is no vacancy for the leadership.

Plibersek on Wednesday said Labor needed to focus on the main game rather than talk endlessly about itself.

“My focus, Anthony Albanese’s focus, the focus of all of our parliamentarians needs to be on the 2.4 million Australians that are looking for a job or looking for more hours of work,” Plibersek said.

“We’re in the worst recession we’ve been in for almost a century. We know that there are Australians who are desperate for security, for opportunity, for hope for their kids. That’s our focus. That has to be our focus”.

Pressed for her reaction to Husic’s departure from Albanese’s office, Plibersek said: “I’m not going to get drawn in to commenting on one employment relationship, in one office, when we’ve got two and a half million Australians who are looking for a job or looking for more hours of work.

“How self-indulgent would it be for me to be standing around talking about us, again, when people are crying out for a job, or more hours of work, who are worried that they’ve gone to a zero hours contract, who don’t know if they’re going to have a job next week or next month, or who for the first time in their lives, for the first time in decades in the workforce, have found themselves unemployed?”